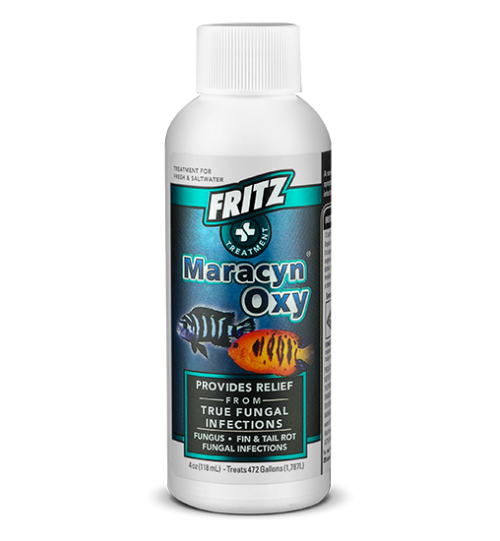 Fritz Maracyn® Oxy is a quick and effective treatment for infections of true fungal infections on fish and eggs (whitish tufts of cotton-like material) and some bacterial diseases. It slowly releases small amounts of a stabilized oxygen-chlorine combination which, when used as directed, has an unusual ability to treat a wide variety of tropical fish diseases. Fungal infections are usually found at the site of an injury or recent attack from parasites. A true fungal infection has a cotton-like appearance similar to a mold found on fruit, bread or cheese, except that on fish, it is usually white instead of black or green. Fungal infections are very difficult to treat and are usually secondary invaders resulting from an injury on the fish or recent wounds from parasites or bacterial infection. Once the fungus starts growing on the fish, it usually continues to grow and enlarge. Unless medication is provided, death results. Fritz Maracyn® Oxy has also been shown to be effective against some gram-negative and gram-positive bacterial infections.

All suspected infections should be treated immediately.

Note: FOR AQUARIUM USE ONLY. Consult a veterinarian or fish expert for assistance in diagnosis of disease causing organisms and treatment options. If you are unsure of the specific infection, Maracyn® Oxy may be used concurrently with Coppersafe®, Maracyn® or Maracyn® Two.

Fritz Maracyn® Oxy is not a toxic material but certain people may have a reaction. Use the following antidotes:

See below for frequently asked questions regarding Fritz Maracyn® Oxy.

Can't find what you're looking for? Ask us a new question.